This story first appeared in the Avalon Literary Review, Winter 2018

He had done this sort of thing before and imagined how it would end. She never had, and couldn’t imagine.


The woman appeared to be no more than thirty-five. He was older. She moved with the grace of a Parisian model, though her disheveled flaxen hair needed a combing. She would have been remarkably attractive if not for her pronounced Gallic nose.


Moisture glistened above her upper lip. Together they cast a sensuous fragrance of rose petals and sweat, the product of some entangled exercising. No one took notice when they entered the cozy hotel lounge.


They sought the most private table, next to the fireplace, and plunked down in the deep upholstered black chairs. The black and white arabesque carpet muffled the sounds of traffic outside on the busy Boulevard Malesherbes. She gazed upon him like a smitten teenager’s first sighting of the handsome French President, Emmanuel Macron. One could sense her cooing when she spoke. He said something to her which caused her to glance down and see that she had missed a hole when she buttoned her white blouse. She unbuttoned and rebuttoned without a hint of embarrassment. He watched, amused.


Soft golden glimmers of fading daylight drenched the paneled walls through the huge skylight above. The impressive girded structure could have been designed by Gustave Eiffel himself. The top-floor suite they exited moments before peered over the Paris rooftops at the iconic engineer’s tower. When the liveried waiter delivered their food, she attacked her croque monsieur, pausing only to gulp from her glass of sauvignon blanc. He nibbled on his cheese plate and grapes, sniffing his deep garnet Bordeaux before each sip. Her ravenous appetite fascinated him, as did everything about her.


When he wasn't eating, his hand rested on her bare knee, hidden beneath the black marble-topped table. Her hand lay comfortably on top of his. Every so often, she leaned close to talk to him, an excuse to touch shoulders. When he did the same, their foreheads touched. She studied their reflection in the mirrors on the large art deco doors leading into the kitchen. She pushed her hair out of her eyes, pleased with the picture of herself on his arm.


He reflected the power of a corporate executive and the harmony of a much younger athlete. His casual smoke gray pants and pin-striped shirt were carefully crafted by the best tailors on London’s Savile Row. His clean shaved dome offered a touch of mature sophistication, as did the gold Montblanc watch on his wrist.


The waiter gave them their privacy except to remove dirty dishes and bring them each a snifter of Courvoisier cognac. They clinked glasses and took a sip. That's when his hand began moving from her knee to her inner thigh. She took a deep drink. She sighed as his hand moved higher under her skirt. She leaned over and kissed him on the cheek, her eyes slowly opening and closing. He watched her squirm and enjoyed it. She collapsed against him and whispered something in his ear. He stood up, taking her hand in his. They raced toward the lobby elevator, laughing. She pressed the button repeatedly as though that might hurry its arrival. He ran his hand gently through her soft blond hair.


When the elevator doors opened, they burst in nearly knocking over the elderly couple trying to get out. The old man peeked back as the doors began to shut in time to see him envelop her in his arms, press her against the wall, and swallow her kiss.

Clearly, this was a test, but for which one of them? Maybe all three. Only an hour before, the older man learned his lover had a young son.


They again sat in deep comfortable black chairs in the lounge. This time the little boy of about seven or eight occupied the chair between them. He clearly belonged to the flaxen haired woman, but he hardly resembled her. He had big brown eyes and a mop of black hair he kept pushing back. He looked serious, but not unpleasantly so.


The older man with the shaved dome spoke to the boy tersely, as if the youngster was one of his business subordinates. His steely eyes could reduce a child to mush as thoroughly as they did any grown man or woman. He strummed his manicured fingers on the marble tabletop marking time until the waiter delivered them menus.


The boy’s mother wore a pale, painted smile, her hands clenching each other like a tightened vice. She sat upright on the edge of her chair, her body rigid. Fragile though she was, she looked as ravishing and stylish as a model in a French fashion magazine. Her beige, collared sweater set off her emerald eyes. A heavily pleated red skirt matched her red shoes, revealing just enough of her shapely legs. Not a hair of her pure golden hair, combed back behind the ears, was out of place.


The boy cut his hamburger in half like he had been taught, glancing at his mother for approval. The man noted the boy’s dexterity and good manners but said nothing. Neither did the boy. She said little more, only occasionally taking a spoonful of her onion soup. Her hand trembled when she raised her wine glass to her mouth. The man chewed mechanically on his grilled cod fillet.


The waiter cleared their plates, her bowl of onion soup only half eaten. That’s when the little boy began fidgeting in his seat in noticeable physical discomfort. He leaned over and whispered something in his mother's ear. She looked around and prepared to get up.


The boy seemed surprised and turned to his mother. She nodded her consent. The boy and the man walked off toward the toilet.


She slumped back in her chair and exhaled. The painted smile she wore all evening loosened into a crooked frown. She sat up when she saw them returning and painted the smile back on her face.


The boy was holding the older man's hand, chattering away, a big grin on his face. The man was clearly enjoying whatever was going on. When they took their seats, the boy told his mother something, his fingers flapping and shoulders wriggling. He giggled. She giggled back. The tension escaped from her like steam off a teapot. The man said something. A devilish look played across his face, and out came something that sounded like a pig's snort. The boy giggled once, then again. He held his hand up to his mouth, failing to stifle a delighted squeal. Then his mother laughed out loud, and the man laughed.


By the time dessert was served, all three had passed the test. They left with the boy walking in the middle, the man holding his right hand, and his mother holding his left.

The two of them nestled comfortably into the stuffed chairs at their favorite table by the fireplace, relaxed, the hard part over. He raised his glass of Bordeaux in a toast to her before taking it to his lips. She smiled and raised her glass of sauvignon blanc.


He thought of what a wonderful mother she was and what a perfect wife she would be. He was tired of being alone. He could see them settled with her adorable little boy, Gilen, in a nice town not far from Paris, perhaps Versailles. He would like that. The little boy reminded him so much of his own estranged son when he was that age. He pushed that hurtful memory from his mind. This time he was going to be a good father. “I love you,” he whispered in her ear, and for the first time in his life, he meant it.


She thought of the fabulous trips they would take together to London, New York, Tokyo, and around the world, she on the arm of one of the world’s most successful commercial real estate developers. She was sure she could convince her mother to take care of Gilen, or maybe have him live with his father for a while. She was tired of being the dutiful, self-sacrificing mother. It was suffocating her.


The impressive diamond ring he gave her earlier this evening sparkled on her finger. “I love you,” she said for only the second time in her life. It was the first time she said it and didn’t mean it.


He took her hand. The fire burning in the fireplace warmed them. What comes next, they each wondered. 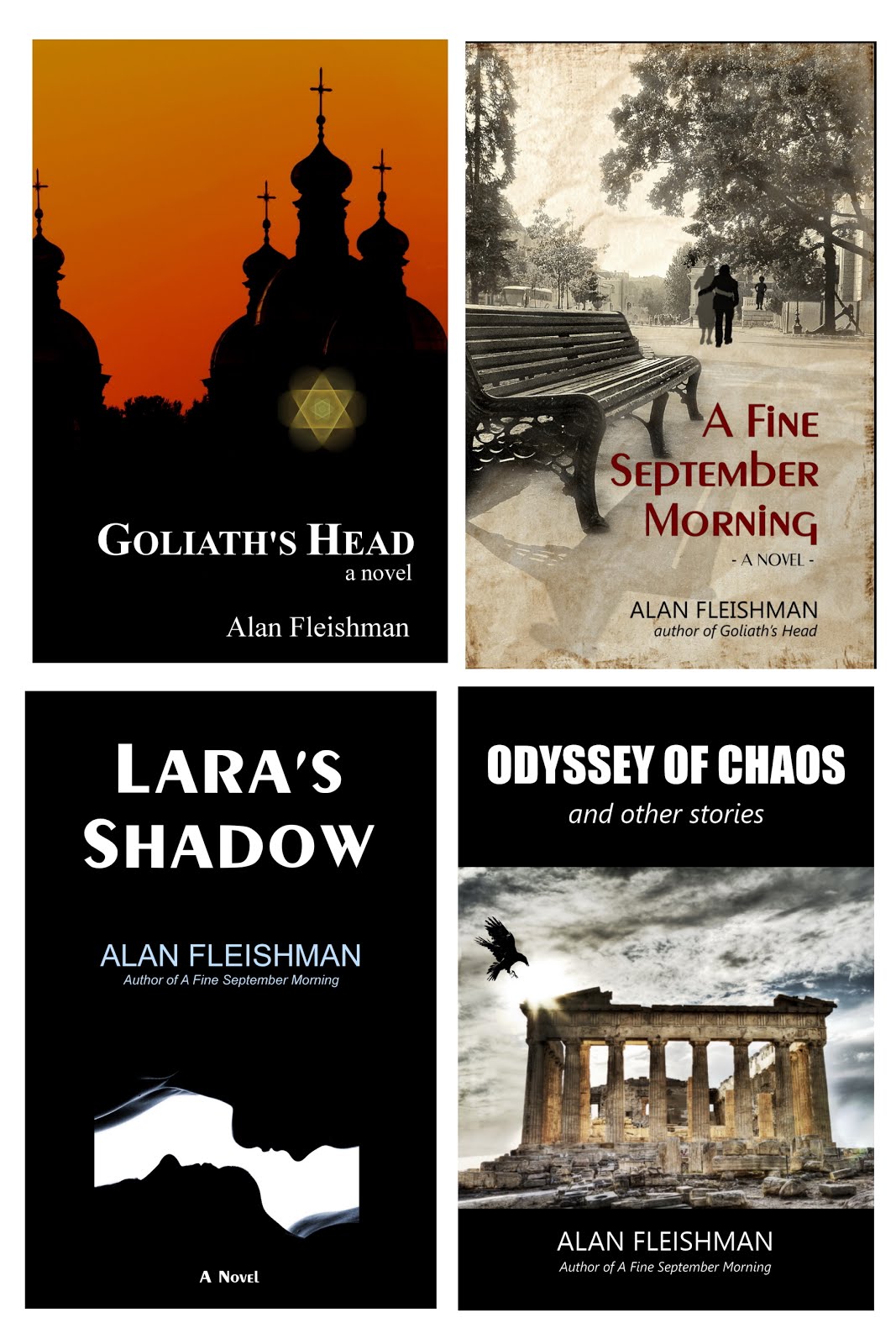 Visit www.alanfleishman.com to preview my novels

Purchase at Amazon, Barnes & Noble, other e-tailers, or order through your local book store.

Available in hardcover, soft cover, Kindle, and other e-reader formats.